You are here: Home  /  WORLD  /  Putin has raised the abhorrent spectre of a nuclear option – could it be a sign of desperation?
WORLD Putin has raised the abhorrent spectre of a nuclear option – could it be a sign of desperation?

Russia’s decision to raise the spectre of a nuclear option in the Ukraine war is a significant escalation, but also perhaps a sign of desperation.

Nuclear weapons are designed to pose the ultimate deterrence to a nuclear-armed enemy. 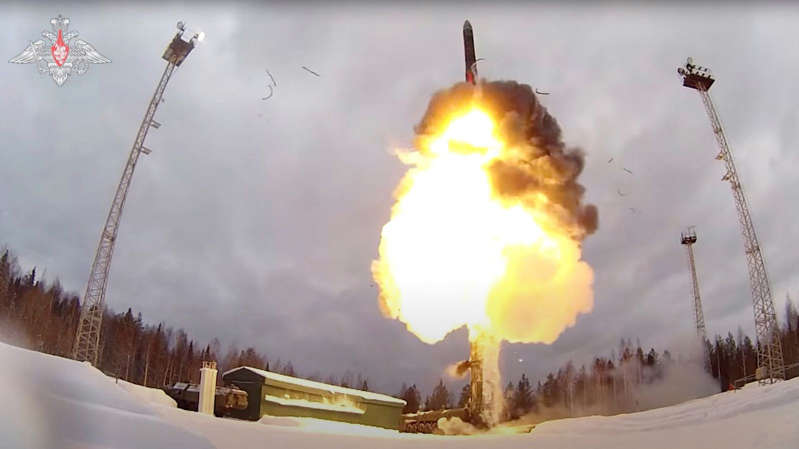 The thinking goes that by possessing nuclear arms – and only a few countries do, including the UK, US and China, though not Ukraine – a state would never use them against another nuclear power or its allies because it would mean mutually assured destruction as they would fire back.

The balance of that calculation though is impacted if one country – in this case Russia – suddenly puts its nuclear-armed forces on high alert.

As well as aggressive signalling to the West, it is also a menace for Ukraine.

Unlike for example UK nuclear weapons policy, Russia’s nuclear doctrine allows for smaller, tactical nuclear warheads to be threatened in a conventional conflict – including against a non-nuclear-armed country such as Ukraine – in the hope that the other side capitulates in fear.

It is referred to as “escalate to de-escalate”.

If the enemy does not back down, then Russia could in theory launch a limited – in relative terms – nuclear strike to inflict such punishing damage as to force a victory.

An abhorrent thought – making for a deliberately escalatory threat by the Kremlin.

But President Vladimir Putin’s invasion is not going to plan. Four days in, his forces, despite their superior firepower, have failed to capture and hold any major cities.

Instead, they appear to be incurring significant losses.

As the invading force, they will know they only have finite supplies, from weapons to rations, so they will need to meet their objectives or face the prospect of retreat.

At the same time, the Western response to the invasion has been far more powerful than even the optimists had imagined.

Russian banks are being cut off from the main international payment system, and much of Europe’s airspace is closed to Russian flights. Allies of Ukraine, including previously opposed Germany, have pledged to supply thousands of much-needed weapons.

In the biggest gamble of his extended time in power, Mr Putin chose to send his troops and missiles into Ukraine last Thursday in defiance of Western warnings to hold back.

It means he cannot afford to fail or else he knows his time in power will almost certainly be over, leaving a legacy of humiliation and defeat.