The female power of the Royal Family has come forward to support the Queen with her duties whilst they keep their personal differences aside. Kate, the Duchess of Cambridge, Camilla, the Duchess of Cornwall, and Sophie, the Countess of Wessex’s presence at the balcony on the Remembrance Day represents “stability” and “constancy” for the family, royal expert Angela Mollard claimed. The trio are part of what is expected to be the leading team the Queen will be relying on in the coming years.

Ms Mollard told Sunrise: “The people you saw on the balcony Kate, Camila, Sophie Wessex, they are going to do more work.

“Prince Charles is fighting fit as he laid two wreaths. Prince William, they will all step up to take more of her place and to create as I said that stability and that constancy that is essential to the monarchy.”

On Remembrance Day, Kate, Camilla, and Sophie were seen standing together commemorating veterans and fallen in the line of duty.

With the Queen recovering from a back sprain, Prince Charles and Camilla embarked on a two-day tour to Jordan, followed by a visit to Egypt.

The Prince of Wales and his eldest son Prince William are also current “Counsellors of State”, therefore allowed to perform duties for the Majesty.

Sophie, the Countess of Wessex with her husband Edward, are patrons of over 70 charities and organisations, where they contribute their time sometimes to the batch cooking for NHS staff to helping out at a local vaccination center.

The Duke of Cambridge and Duchess of Cambridge are believed to be planning a visit to the US visit by next year to mark and celebrate the UK’s strong relations with the country.

Expert Robert Jobson said: “You will have seen he [Prince William] has over the last few months move into a more senior role for him.

“Essentially we have a monarchy in transition at this moment.”

He added how the Queen currently is “not as active as she would probably like to be” amid her various health setbacks.

But Mr Jobson was honest that ultimately the Royal Family are undergoing major changes as Prince Charles and Prince William see their responsibilities grow in size and importance. 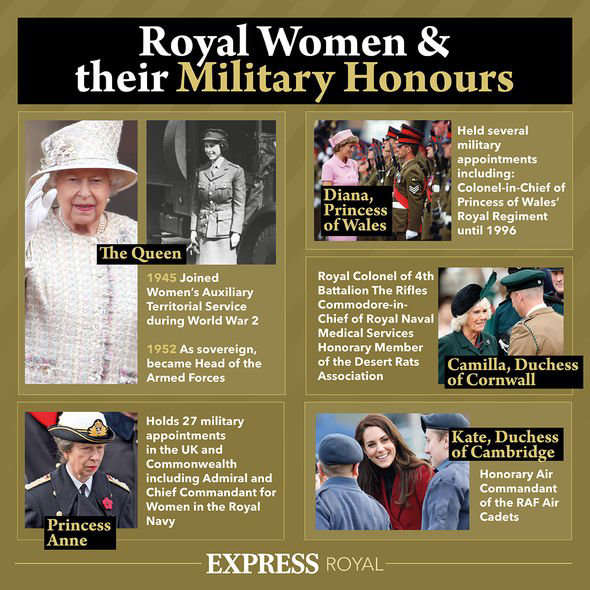 He continued: “Really Prince Charles is the heir to the throne and William in particular have both been stepping up.

“And really that is the way it is going to be going forward.”

According to the BBC royal correspondent Sarah Campbell, “the family mantra” of the House of Windsor is “we have to be seen to be believed”.