The latest charts show the mercury plummeting to well below negative territory heading into next month. Britain has been noticeably colder over recent days, with temperatures plummeting into single figures and raising fears snow might be on the way. Today (Tuesday), minimum temperatures in the UK are only forecast to fall to highs of 14C in large areas of Southwest England and 10C in small patches of Central Scotland.

But signs of a cold winter snap will become much more evident this weekend, with the latest Netweather maps showing the mercury dipping to as low as 10C in and around London, and even further to just 2C in Northern Scotland.

On Monday, the first icy blue patches begin to appear on the UK charts in Scotland, with early morning temperatures plunging towards zero.

It won’t be too much warmer throughout the rest of Britain, with minimum temperature highs of just 10C in London and a few degrees lower in several other surrounding areas.

By next Wednesday, this icy blue patch on the weather map has expanded significantly, threatening to spread into Northern England as the mercury plummets to as low as -2C at around 9am.

Minimum temperature highs are only set to hit 8C in East Anglia at this time and as low as 1C in small areas of Northern England. 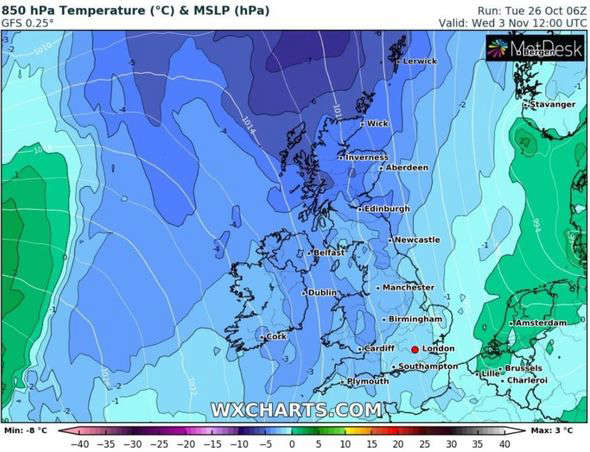 This bitterly cold snap will continue into next Wednesday evening as freezing minimum temperatures of -3C grip large parts of Central Scotland.

The rest of the UK is forecast to stay just above freezing, with minimum temperature highs of just 4C across most of Southern England.

However by midday next Thursday, this icy cold patch is significantly bigger as large parts of the UK begin to be gripped by bitterly cold conditions.

The mercury could fall to as low as -6C in a small part of Northern Scotland, while parts of Northern England could be hit by lows of just -2C. 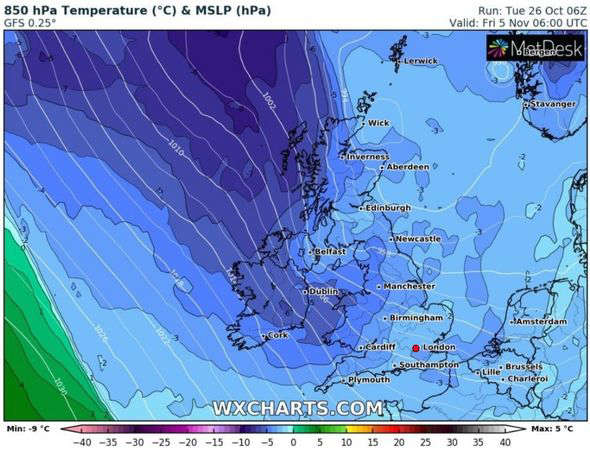 This freezing theme will continue for much of the following week, but on November 11 temperatures are forecast to plummet even further to as low as -10 in a small part of Scotland at midnight.

BBC Weather has warned that through mid-November, UK temperatures will likely trend near or below average for most areas.

During the second half of next month, colder North Atlantic air is set to arrive from Greenland, likely sending temperatures plummeting to below average. 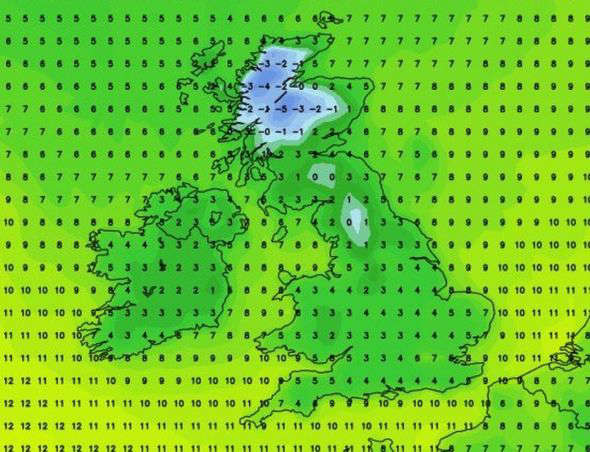 The forecast for November 8-21 reads: “Mid-November will likely be a transition period as high pressure gradually shift into western Europe and the Atlantic, displacing low pressure troughs into Northeast Europe.

“During this transition, the weather in the UK will likely remain unsettled with temperatures trending near or below average for most places as winds shift more to the northwest.

“As we head into the second half of November, we think the blocking high will be in place and linger just to the west of us. 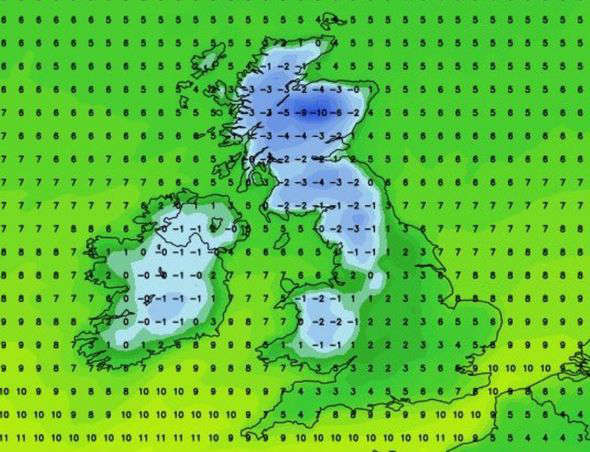 “This means north westerly winds bring in colder North Atlantic air from Greenland, so temperatures should tend to be below average.

“However, weather fronts will be deflected east, so it should be dry and calm.

“Frost is likely overnight in these conditions, and any weak showers that reach into northern Scotland could turn wintry in the hills.” 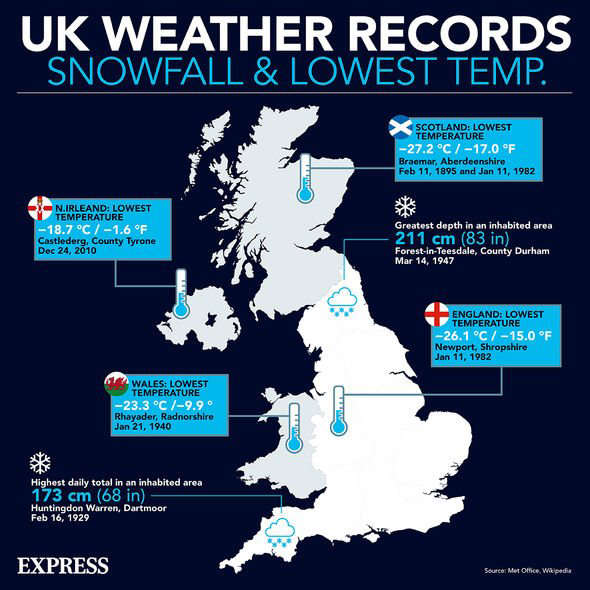 The Met Office has forecast colder nights throughout the second half of November, with a risk of frost and increased chance of mist and fog, particularly overnight.

The forecaster said on its website: In the longer term, a continuation of the generally unsettled theme seems likely at first, with more rain and further showers in many places, especially once again in western areas – with temperatures around or a little above average.

“Towards the middle and end of November, there are signals for a greater chance of more settled conditions developing, particularly in southern and western areas, where colder nights are likely with a risk of frost, as well as an increased chance of mist and fog – especially overnight.”