You are here: Home  /  WORLD  /  US-China war fears: Expert warns any conflict will ‘get worse before it gets worse’
WORLD US-China war fears: Expert warns any conflict will ‘get worse before it gets worse’

Tensions between the two nuclear nations have continued to escalate despite the US President’s pledge not to seek conflict with China. However, on Thursday Joe Biden chose to criticise his Chinese counterpart Xi Jinping in a brutal blast.

Speaking at a press conference the American leader said: “[Xi Jinping] doesn’t have a democratic – with a small ‘d’ – bone in his body, but he’s a smart, smart guy.”

Mr Biden went on to compare the Chinese President to the Russian President Vladimir Putin.

He said: “He’s one of the guys like Putin, who thinks that autocracy is the wave of the future [and that] democracy can’t function in an ever complex world.”

President Biden, who met Mr Xi when he was Vice President under Barack Obama, also pledged to prevent China from becoming the “wealthiest” and “leading” country in the world.

However, Harvard University military historian Graham Allison told ABC News that any conflict between the two superpowers would “get worse before it gets worse”.

The expert explained that any war will escalate and drag other countries across the Indo-Pacific – possibly globally.

Mr Allison also warned that there is the potential for the conflict to become a nuclear war.

During his speech on Thursday, Mr Biden said the US would lean on allies and boost America’s investment in technology to counter China’s future dominance.

He said: “I see stiff competition with China.

“That’s not going to happen on my watch, because United States is going to continue to grow and expand.”

The US President added: “We’re not looking for confrontation, although we know there will be steep, steep competition.

“This is a battle between the utility of democracies in the 21st century, and autocracies.”

In a call between the US and Chinese Presidents in February, Mr Xi reportedly expressed a desire to improve relations.

But, in a speech, China’s top diplomat, Wang Yi, accuse the US of “smearing” the reputation of China’s ruling Communist Party.

He said: “We hope that the US policy makers will keep pace with the times, see clearly the trend of the world, abandon biases, give up unwarranted suspicions and move to bring the China policy back to reason to ensure a healthy, steady development of China-US relations.”

Since the start of Biden’s administration, the US Navy has sent aircrafts and vessels into the disputed South China Sea.

The moves have angered Beijing which claims ownership over a large part of the disputed waters.

US Defence Secretary Lloyd Austin said at the start of this year that China “is our most significant challenge going forward”. 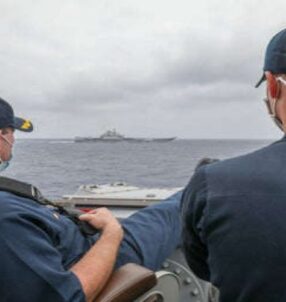