Rampant inflation will curb UK growth in the coming months after a bigger-than-expected bounceback last year, according to a new report.

The EY ITEM Club has downgraded its predictions for growth in its Winter Forecast to 4.9pc for the year, compared with the 5.6pc it predicted in the autumn. It estimates the economy grew an upgraded 7.3pc last year.

Its economists predict inflation will peak at 7pc in the spring, up from the 5pc prediction made just a few months ago. They forecast the Bank of England will raise interest rates to 1pc by the year’s end in an effort to curb rising prices.

Inflation will not settle back to the BoE’s 2pc target until the first half of 2023, they said, with consumers facing further months of high energy prices and supply chain disruptions,

He added: “While the economy and UK businesses may have a softer launch pad for growth this year, they will still benefit from a number of tailwinds in 2022 and 2023.

“But blowing in the opposite direction will be a squeeze on household spending power which is expected to be a bigger headwind for the economy than the Omicron variant. Inflation is set to reach its highest level in thirty years by the spring and will be well ahead of pay growth.”

Consumer spending is forecast to grow 5.7pc this year, another downgrade from the 6.8pc previously predicted.

EY Item Club said 2022 looks set to be the first year when average worker pay has fallen in real terms since 2017, but said a recovery in spending will be supported by “the lifting of restrictions, omicron hesitancy receding, historically high levels of household savings, and low unemployment”.

Unemployment is expected to remain stable at its current rate of 4.1pc for most of the year, before declining to a historic low of 4pc by the end of the year.

Business investment is expected to rise 12.7pc during the year as businesses begin spending again. It was tepid through 2021, with projected growth of just 1pc according to EY.

The report noted that businesses have built up a huge war chest during the pandemic, with corporations setting on “excess” cash holdings of £115bn, equivalent to 5pc of GDP.

“An assumption that the worst of the pandemic is over, the UK ‘super deduction’ investment incentive, as well as a need to adapt to worker shortages, Net Zero targets and the pandemic-accelerated digitalisation of the economy should all encourage businesses to invest,” said the report.

“If COVID-19 uncertainty re-emerges, some businesses might continue to curb their investment spending. After going through the economic shock caused by the pandemic, businesses will be looking for certainty and investment support from policymakers,” he said.

The report said there was no clear-cut “Brexit effect” yet apparent in growth data, noting that a roughly 20pc fall in overall trade between the UK and Europe has chiefly been driven by a fall in imports from the block.

Martin Beck, EY Item Club’s chief economic advisor, said: “while exports to the EU haven’t fallen significantly, they may be lower than they would have been had the UK remained in the bloc, and there have been clear drags in some sectors such as agri-food.” 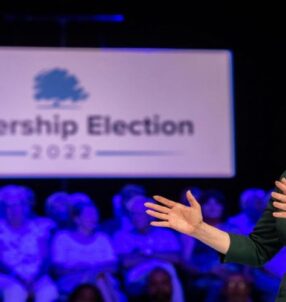