This year is the 99th anniversary of the Burning of Smyrna, part of the Genocide described in Benny Morris and Dror Ze’evi’s book The Thirty-Year Genocide: Turkey’s Destruction of Its Christian Minorities 1894-1924. As Katsos noted: “Although we have various dates of remembrance for the various aspects of the systemic Christian genocide, Hellenic (Thracian, Pontian, Asia Minor), Armenian, and Assyrian, by the Ottoman Turks it is important to note that the genocide in many ways should be understood as a single event that targeted all the Christian minorities in the late Ottoman period.”

He continued: “Millions were targeted and systematically murdered during the period and it is shocking that some nations have not recognized the first major genocide of the 20th century to this day. Although Christians in 1894 represented 20% of the population and not disputed, in what later became the Turkish Republic (1923), only tens of thousands remained in 1924. We hope this panel discussion and conversation contributes to a continuing wave of research, discussions, activism, justice, and results in terms of recognition on this very important topic of historic systemic genocide. May the memories of those that perished and those subjected to inhuman cruelties be eternal, and never forgotten.”

Katsos noted: “The Burning of Smyrna/Smyrna Catastrophe (Καταστροφή της Σμύρνης) refers to the deliberately set fire four days after Turkish forces entered and captured the port city of cosmopolitan Smyrna in Asia Minor and which completely destroyed its Hellenic and Armenian quarters. Its Muslim quarters escaped damage. The fire was started September 13 and extinguished September 22 in 1922. Turkish troops per eyewitnesses systematically cordoned off the Quay to contain the Hellenes and Armenians within their fire zone quarters and prevented them from fleeing.”

He continued: “The estimated Hellenic and Armenian deaths resulting from the fire range up to 100,000 and approximately up to 400,000 Hellenic and Armenian refugees in the city from other parts of Asia Minor to escape the Turkish troops and irregulars cramming its waterfront and quays to escape from the horrific flames. Eyewitness reports describe panic-stricken civilian refugees diving into the water to escape the flames and that their terrified screaming could be heard miles away. They were forced to remain there under harsh conditions and were periodically robbed for two weeks and after having had massacres and atrocities committed on them before the outbreak of the fire. Women were raped and tens of thousands of Hellenic and Armenian men were subsequently deported into the interior of Anatolia, where many died in harsh and brutal conditions. After the Smyrna Catastrophe the Hellenic city founded over 3,000 years before, a jewel of the Eastern Mediterranean, ceased to have Hellenic residents.”

Prof. Lamb spoke about U.S. Consul at Smyrna George Horton, noting that her biography of him is done and will be published soon. She made four points in her presentation that World War I ended on the southeastern front and not the western front, the Greco-Turkish war was a continuation of WWI, the Greek administration in Smyrna was actually progressive, and the world paid a terrible price for Catastrophe and the Christian genocide.

Stavrianidis spoke about the Megali Idea, the Great Idea, the vision for reclaiming “lost lands” and pondered why Eleftherios Venizelos called for elections in the midst of the Asia Minor campaign. He noted key figures of the time including Ion Dragoumis and Ioannis Metaxas and their views on the issue.

Diamadis, speaking from Sydney, first acknowledged the indigenous people of the area, and then noted the role of Americans, Australians and New Zealanders in the relief efforts for the genocide of the Hellenes, Armenians, and Assyrians. He pointed out that the WWI armistice was on November 11, 1918 and by December 12, 1918 the Lord Mayor of Sydney brought together the various organizations and communities already involved in the relief efforts, highlighting the fact that this was an international effort well before the Greco-Turkish War began, and set the standard for humanitarian relief campaigns.

Koktzoglou spoke about his book with Robert Shenk, The Greek Genocide in American Naval War Diaries: Naval Commanders Report and Protest Death Marches and Massacres in Turkey’s Pontus Region, 1921-1922, noting that it was academically vetted before it was published and went through a rigorous peer review, in order to help the cause of genocide recognition. He also spoke about the book Certain Samaritans by Esther Pohl Lovejoy who was a physician and founding director of the American Women’s Hospitals Service which provided humanitarian and medical relief to the survivors of the Greek Genocide. She arrived at Smyrna while the city was still smoldering from the fire that had been lit on September 13, 1922 and which destroyed two-thirds of the city. The book includes her testimony of the events at Smyrna. 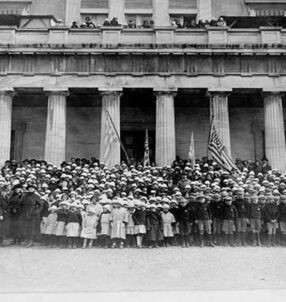