You are here: Home  /  TOURISM  /  Removing Portugal from the green list is based on inaccurate data and will have very negative consequences
TOURISM Once again, it was with great disappointment but not surprise that I received the news that after 8 June Portugal will no longer be a “green” destination for UK travellers, roughly three weeks after being designated as such, but instead an “amber” one. I say I was not surprised because on the eve of that disappointing news I heard Prime Minister Boris Johnson vividly and emphatically stating that his government would not hesitate to downgrade “green countries” to “amber” status. For me, those words undoubtedly had Portugal in mind as an inevitable target. I should reiterate that the UK, as an independent and sovereign State, is free to impose any measures it chooses relating to the movement of people to and from third countries. I cannot, obviously, oppose those measures. However, fortunately, in a free and democratic country like the UK I can respectfully disagree with the fundamentals of such decisions.

In light of attempts to justify Portugal’s demotion to the “amber list” with facts and figures on the pandemic and variants of concern, I wish to put the record straight and provide readers with some accurate data. The incidence rate in Portugal for the last 7 days is 37.2/100 thousand while in the UK it is 33.7/100 thousand. Portugal has one of the lowest incidence rates in the EU. Only Finland, Malta and Romania present significantly better figures. Hospital admissions, patients in ICU and deaths are steadily declining in my country and the vaccination programme continues to progress at a very good pace.

Since both the type and number of virus variants in Portugal have been mentioned by the UK government, I wish to make it clear that at this date only 68 confirmed cases of the so-called Indian or Delta variant (4.8% of the total), and 12 cases of its K417N mutation, sometimes called the “Nepal variant”, have been detected. This compares very favourably with the situation in the UK, where more than 12,400 cases of the Delta variant have been identified, with at least 34 occurrences of its mutation. Besides, it is simply incorrect to say that the number of cases in Portugal has recently doubled. I suspect that in this respect the UK may have actually performed worse than Portugal, as its numbers are increasing daily. This, in fact, should not come entirely as a surprise: it is quite “normal” that as we begin to emerge from lockdown, the number of infections will increase.

What we have to guarantee is that the pandemic is under control and that the health services are not put under stress. That is exactly what is happening in Portugal. We embarked on a post-lockdown re-opening of our society and our economy that is prudent, realistic and safe, and we will continue on this path. These being the facts, one can only then speculate on what might have led the UK government to relegate Portugal from the “green” to the “amber list”. It is worth noting that no EU member states appear on the “green list” and one might conclude that perhaps this was a deliberate consideration. However, I cannot help but concur with the many British analysts and commentators who argue that this decision should be seen in the context of the UK government’s plans to fully lift the lockdown on the 21 st of June, something it wishes to do under the safest possible conditions.

So, the decision is likely the result of a mix of both public health and political considerations. However, I am not convinced that keeping Portugal on the “green list”, in face of the above mentioned figures, would have in any way put at risk the lifting of the lockdown and the obvious benefits this would bring. On the contrary, people are looking for freedom, for the chance to travel, for a positive change after what has been a very difficult time. Unfortunately, the position adopted by some in the UK, including those in positions of political influence and across the political aisle, against the country’s international reopening is not a helpful contribution to this debate, and puts the Government under further pressure to reduce the number of countries on the “green list”.

At the end of the day, however, the consequences of the UK’s decision in respect to Portugal are unfortunately very negative. Not just for British tourists and economic agents, and for the Portuguese community, which once again finds its mobility constrained, but also for my country as favourite destination for restful, beautiful holidays bathed in marvellous sunshine.

Manuel Lobo Antunes is the Portuguese ambassador to the UK 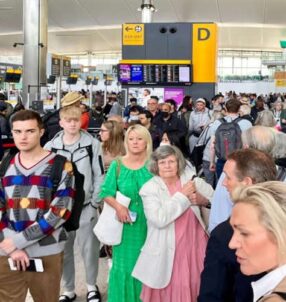