WEST NYACK, NY – Kathara Deftera or Clean Monday marks the beginning of Great Lent, a period of spiritual purification in preparation for the solemnity of Orthodox Easter, and kites have been an essential part of celebrations for more than a century in Greece. The custom of flying kites on Clean Monday is directly linked to the spiritual state of mind of Orthodox Christians.

Scholars have found evidence of Easter-season kite-flying in Europe as far back as the 17th century. For many religious Greeks, it signifies a desire to reach for the divine. It has thus been deeply rooted in Orthodox Christian tradition as it symbolizes the passing of the human soul to Heaven and God, with people in older times even believing that the higher their kite flew, the more possible it would be for their prayers to be heard by God.

Clean Monday is also celebrated with Lagana bread, a special type of flatbread that is prepared and eaten on Clean Monday throughout Greece.

These traditions were celebrated on March 14 in West Nyack, north from New York City, on a large open field on the grounds of Saints Constantine and Helen Greek Orthodox Church. The kite flying afternoon was sponsored by AHEPA Chapter #455 and began with the distribution of loaves of Lagana flatbreads to parish families. AHEPA Chapter President George Hanos said that “as an organization responsible for promoting Hellenism and our Greek culture and traditions, it was important as we come out of the depths of the pandemic to bring back some normalcy to the local community as we approach the Easter holiday so we decided to distribute Lagana bread so that families don’t need to travel far to have this traditional bread for Clean Monday.”

This was the first time AHEPA held this type of event and distributed over 90 laganes. The Chapter intends to make this an annual event.

AHEPA members built many beautiful kites and gave them to Greek School students and their families to fly. “We were blessed with a blue-sky day and the wind was perfect for flying kites. The kids had a great time being outside and learning. We, too, are happy to share our traditions here in Rockland County knowing that on Monday all of Greece would be flying kites,” said Michael Tribunella, Vice President of Chapter #455. Tribunella is already looking forward to next year! 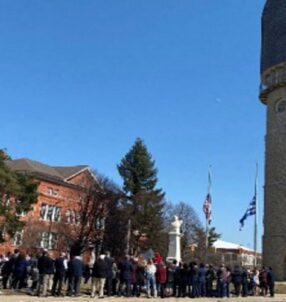