You are here: Home  /  INTERVIEWS  /  Still A Beauty
INTERVIEWS Corinna Tsopei is a Greek actress, model, and beauty queen who won Miss Universe 1964.
After completing her reign as Miss Universe, she went on to pursue a movie career, making five appearances (including a “Girl in Cage”, a “Tennis Girl”) in 1967 and 1968, before appearing in her only prominent role as the love interest of the lead character in A Man Called Horse (1970). Tsopei also guest-starred in a 1967 episode of the television series Lost in Space (“Castles in Space”) and a 1968 episode of Daniel Boone.
Corinna Tsopei Fields has three sons. She resides in Los Angeles, California, and pays frequent visits to Greece to visit relatives.  Currently, Corinna Tsopei Fields is serving her second term as the president of SHARE charity.

Tell us about your childhood years.

I was born in June 1944, just a few months after the Germans left Greece and during the civil war. My parents were very young and poor, but very loving. They were also very, very strict. Ever since I can remember, I dreamed of a better tomorrow. Every Sunday at two o’clock, I would go to the movies and fantasize about the American dream with images of Rock Hudson, Doris Day and Tony Curtis. I was with them every night in my dreams. In one dream, I was walking around Hollywood in the rain. I went up to a house, knocked on the door and Rock Hudson opened it and said to me, “My darling, come in.” I wouldn’t go into the house, because I knew better. This fantasy world kept me wishing and dreaming every single day of my life until my ticket to Hollywood revealed itself: winning Miss Greece and then winning the Miss Universe title. That was my plan. And it came true. My mother, at twenty years old, had three children. My father, who was in the army, was born in Mani municipality. He had a huge impact on my life. I always wanted to make him proud. These were the rules: no speaking with boys and no dressing scantily (nothing above the knee). He gave me love and fear at the same time.

After your title Miss Star Hellas 1964, we all know that you were given many job offers in acting, commercials, and theater but what was the reason you left Greece for the USA?

I got a lot of offers, but my dream was always to go to America. So, that is the motivation behind my leaving Greece. If you had to define beauty before your win as the crowned Miss

Universe 1964, would you give the same definition after the title you won?

I personally believe that every girl knows about herself and their limitations. They know how attractive they are. I was terribly insecure about my looks. So, I felt that my smile and personality were equally important. A friend told
me that before I left for America, I was going to be around extremely beautiful women and that every one of them had a chance to win the title. That pissed me off. He also gave me the best advice I could have had. He told me to be myself. He said to look at people in the eyes and talk to them the way you always have. Most of the non-English speaking girls would look mostly at the translators when they were talking with people. I never looked at the translator. I looked at the person to whom I was speaking and, even though I was speaking Greek, engaged them in the conversation.

What is family for you?

What makes you happy in life apart from being a mother and a grandmother?

Helping others – especially children – gives me the most pleasure. That’s why I’ve been involved with an organization of wonderful ladies called SHARE, since 1985.

Do you believe that people in our society don’t love each other and some of them don’t even themselves? Do people have lost their values?

I’m afraid I have to disagree. I believe our society tends to focus on the negative and the suffering of people. To a great extent, social media and the internet fan the flames of this.

Are there any funny mistakes you have made?

Two years after I won Miss Universe, I was in Miami as a guest on the show. At the after-party, I sat with several people, including an older man. The man asked me to dance. He was the most wonderful dancer. He twirled me around the dance floor with ease. I was so impressed. I told him over and over how good he was. When I sat down, I said to my date, “Wow, this old guy is a great dancer”. My date said, &quot;Are you kidding?  That’s Fred Astaire”. Then, I found out who he was.

Would you do things differently in your life?

You’re the President of SHARE organization. How important is this for you what’s your contribution, vision, and mission?

The mission of SHARE is to assist children. We help kids with special needs, those who are abused, and those who are developmentally or physically disabled.

You’re a person of great influence. If you could inspire a movement what would that be?

I would like mothers to teach their children to respect one another. Girls respect boys and boys respect girls. Treat people like you want to be treated.

You’re an active person. What are some of your future plans?

I learned to live one day at a time. So, right now I’m having a great time. What’s your favorite life lesson quote?
Nothing lasts forever.

If I asked you to take a trip down memory lane what would that be?

There are so many wonderful memories, I cannot choose one here. Someday, if we meet in person, I can tell you. 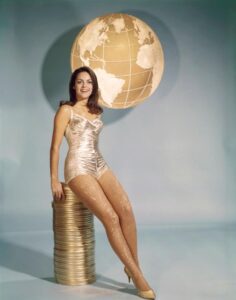