You are here: Home  /  TOURISM  /  Supersonic: Inside the 1,300mph jet that will fly you from New York to London in less than four hours
TOURISM 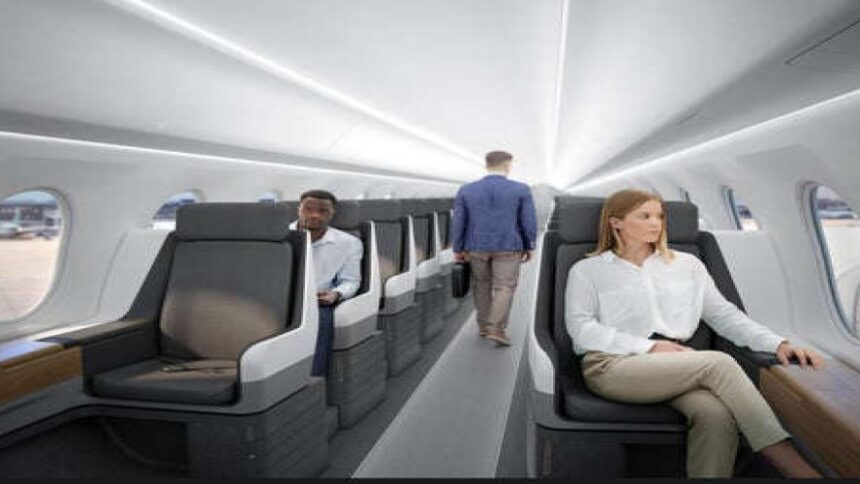 Supersonic: Inside the 1,300mph jet that will fly you from New York to London in less than four hours

It is the ultrafast jet that could be set to revolutionise air travel.

United Airlines has announced that it will buy 15 supersonic planes that can hit speeds of 1,300mph and slash the time it takes to fly from New York to London to 3.5 hours.

The airline also has the option to buy another 35 of the Overture jets, which have not yet been built or certified, from manufacturer Boom at a future date.

Boom’s promotional images of the passenger cab of the plane, which could fly as fast as Mach 1.7, show passengers sitting in single grey and white seats on either side of a central aisle.

Each seating area appears to be trimmed with light wood, with a wooden tray to work on and a large built in entertainment screen in the back of the chair in front.

The supersonic Concorde flew commercial flights from 1976 until October 2003 and Boom says its reinvention of supersonic travel will be 75 per cent more efficient than the iconic jet.

The planes, which will fly twice the speed of current passenger jets, are expected to be rolled out in 2025, take flight in 2026, and start carrying passengers in 2029.

Since Denver-based Boom was founded in 2014 it has raised $270m in capital and now has 150 employees.

The value of the deal with United, its first with a commercial airline, has not been made public.

United Airlines said that the planes “can connect more than 500 destinations in nearly half the time”.

The company added: “Among the many future potential routes for United are Newark to London in just three and a half hours, Newark to Frankfurt in four hours and San Francisco to Tokyo in just six hours. Overture will also be designed with features such as in-seat entertainment screens, ample personal space, and contactless technology.”

The planes will also use 100 per cent sustainable fuel and is expected to be the first large commercial aircraft that will be net-zero carbon from day one of flying.

But experts say that a plane of this kind will likely require multiple times more fuel per passenger than a regular airplane uses, and that sustainable aviation fuel is already rare.

“These would be alternatives to fossil jet fuel, and that fuel is extremely rare today — and it’s also extremely expensive,” said Dan Rutherford, director of the International Council on Clean Transportation’s aviation programme

“It’s a super small market already, and trying to combine that with an aircraft that we know will burn a lot of fuel seems really dicey to me.”

Boom has said it will work with United to not negatively impact the supply of sustainable jet fuel for other planes.

Experts say that the companies will also have to fix the cabin noise problems that came with Concorde, as well as the sonic boom created when the plane breaks the speed of sound.