The cargo ship backlog has become a tourist attraction in Savannah, according to a Georgia travel executive.

People are coming to the area specifically to see the cargo ships after reports of the port wrestling with high volumes of containers, and dozens of vessels waiting to dock.

“We’re seeing visitation numbers grow with people that are interested in seeing, sort of, the parade of ships that are coming in and out of town,” Joseph Marinelli, president of Visit Savannah, told Business Insider.

There have been months-long backlogs of cargo around the world, after the pandemic disrupted global supply chains and markets.

This week, around 70 cargo ships were forced to line up outside California’s ports, in Los Angeles and Long Beach, which bring in 40 per cent of the cargo containers entering the US.

Ship-watching is becoming quite the tourist activity, as fanatics equipped with specialist marine tracking apps to monitor ships’ routes help to identify boats and where they come from. Boats come in from the far east via the Panama Canal, some also come from European ports. The queues at Savannah port are a chance to see lots of the gargantuan vessels up close.

“Some of the best vantage points to watch the ships are anywhere along Savannah’s famous River Street, or one of our historic forts (Fort Jackson and Fort Pulaski) or watching them come in from the ocean from Tybee Islands north beach,” said Mr Marinelli to The Independent.

“The ships are international in nature and are very colourful and extremely large. But the fact that they are so close, especially along River Street, the size and scope of the ships is breathtaking.”

It’s so far hard to quantify the increase in tourism based solely on ship enthusiasts, explained the Visit Savannah boss, but hotels, restaurants and stores have seen an uptick in recent months, said Marinelli.

In recent weeks, retailers have rushed to place orders ahead of the holidays, but the global shipping system is lagging behind. There have been warnings of toy shortages, clothes and food shortages over the Christmas period, caused by surging demand, labour shortages and supply-chain challenges, prices for goods are predicted to rise as a result. 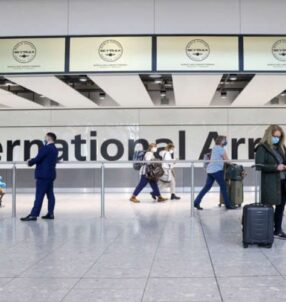