You are here: Home  /  INTERVIEWS  /  Interview with Abbas Fasaei
INTERVIEWS Interview by Vassilios Nicolaos Vitsilogiannis
(IG: @vassiliosvitsilogiannis)
Abbas Fasaei is a Belgian actor and acting teacher, with over two decades of experience. Originally, he comes from Iran. He started his acting career when he was 12 and he’s a student of Michael Margotta and Oscar winner Paul Haggis. Abbas Fasaei was nominated for the Belgian Ensors. He played in Iron Sky, Undercover, Tehran, Het Gouden Uur and Diepe Gronden. He is the owner and headteacher of the CinAct Acting Academy, working closely with the AED Studios in Lint. He teaches the Stanislavski method. His students go on to act in Belgian and international movies and series. Also, he teaches acting and psychodrama in different countries such as Italy, Russia, the USA, France, and Colombia.

Before I proceed with questions concerning your acting career, let our readers know what is CinAct?

CinAct is more than just an acting academy, it’s a community where people from all backgrounds and ages come together to learn about acting and develop themselves. We have three locations, one based in the AED Studios, the biggest film studio in Benelux and we have approximately 350 studios. At the moment, we’re planning to open one in Greece. We teach them the right mindset, ethics, and skills required for acting. Everything starts with work on oneself, this is the most fundamental and basic step, and this is exactly what we help our students develop from day one. We have a holistic approach to the education of our students and our classes are based on Stanislavsky. Although established relatively recently, we’re already growing into a hub for people from the industry, not only from the Belgian film scene but worldwide.

Honestly, I don’t know much about Iranian cinema unfortunately because I’ve been active mostly in Belgium and Europe. It used to be my dream to work in the country where I was born, but after doing the Apple TV+ series “Tehran”, it’s impossible for me to go back to Iran. Unfortunately, it’s too risky for me to go back due to the bad relationship between Iran and Israel. Abbas Kiarostami was my coach for a couple of days and I think that he is one of the geniuses of cinema.

At a very young age, you started theater school. What made you decide to take this direction?

When I was a kid, my teachers used to tell me that I had to become an actor and I had a real talent for it. So, they really pushed me towards the theater. I thought theater was very good to start with, but I felt that I had to express myself too much externally, and be more physical. While in the cinema I&#39;ve found that everything is more internally, closer, more condense. I prefer to do one project and then move on to the next one, I love variety.

What are some of the collaborations you take pride in?

Shaun Toub has always been an actor who I’ve been looking up to because he’s a successful Iranian actor overseas. I’ve had the pleasure to meet him through the &quot;Tehran” mini-series, and we’ve become close friends ever since. Aside from that, I&#39;ve also had the pleasure to be involved in the same project as Glenn Close, who is a wonderful human being and one of the great actresses of our time. Of course, my good friend Manu Bennett, he’s come to CinAct and we were able to organize some inspiring workshops for our students. During  “Spider In The Web”, it was also very special to me to work with Monica Bellucci and Ben Kingsley. And right now, I’m working on a Guy Ritchie film and I’m honored to work with Jake Gyllenhaal, who’s also a great actor.

Do you regret any of the films you did because of your desire to push your own limits?

I never regret anything that I’ve done in my life, even when they turned out to be mistakes. Because it made me become who I am now.

If you had to choose what would you choose theater, cinema or television?

I would have to choose between cinema or television. But then if I had to choose, I’d rather choose television. The reason is, that in television there is more of a relationship between a character and the audience because of the length and the arch of the character.

How do you think you would feel if you failed to achieve any of your goals?

Failure is a part of the journey towards success. When I fail at something, it fuels me to try to find a way to become better. And if I don’t get a project, then I think it was not meant for me.

At what times do you appreciate people being honest with you?

I have no expectations of anyone to be anything towards me. But if they are honest, they’re closer to me and I think it is the basic fundament of any kind of relationship.

Are you enjoying this part of your life?

I try to enjoy every process that I go through currently. And to be honest, sometimes it’s very difficult, because of the pressure that I put on myself to grow, and be more creative. But I work on it and try to meditate and be grateful for the things that I have.

Have you achieved what you really wanted to achieve?

I’ve created this amazing community with CinAct and I get to pass on my knowledge. Seeing my students grow and develop is amazing. I try to pull up people around me and take them with me to new heights. I’ve had the opportunity to work on some interesting and creative projects. I’m happiest when I’m working on passion projects where they let the creativity flow freely and I’ve been fortunate to have been in many of such projects already. Another achievement is after my father committed suicide. I took a lot of medication, especially anti-depressants, which influenced my brain and my ability to comprehend and retain information such as my lines and my dyslexia got worse because of these. So, I trained and pushed myself to be able to do monologues of more than 6 pages.

Can you separate life from work?

As an artist, it is very difficult to separate these from one another, and that’s one of my goals in life, which I am now at 70% of.

Do you look into the future much?

I believe that we, human beings, look at something and we move towards it. I always try to look forward, I believe that the future pulls me towards where I put my focus and energy. I’m also a strong advocate of manifestation, I manifest everything that I want. 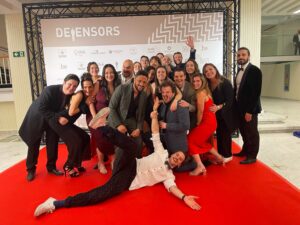 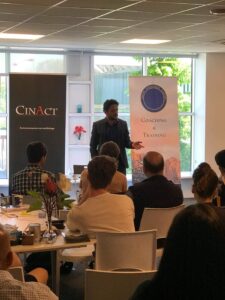 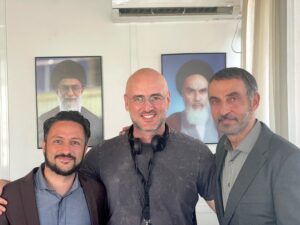